GEIR has its office in Brussels from where it can easily communicate and exchange information with the European official bodies (Commission, Council and Parliament).

GEIR member companies are active throughout Europe in supporting the collection of used lubricants and re-refining these back to valuable base oils for the formulation of lubricants.

GEIR defends the interests of the re-refining industry and promotes a sound exchange of information on quantities of waste oils produced and types of renewed products offered by its member companies. For this reason, permanent contacts are maintained with the European official bodies as well as with all private and public organisations that are showing interest in the very actual and crucial issue of waste oil.

Used mineral lubricating oils represent the largest amount of liquid, non-aqueous hazardous waste in the world. Across the globe there are over a billion vehicles on our roads – that is more than 20 billion kilograms of engine oil in use which translates into a lot of oil to dispose of every year. Moreover 20 billions kilograms of oils are used each year in different industrial processes – for instance as hydraulic oils or machinery lubricants.

Collection of used lubricants and their re-refining represents a true example of circular economy, as re-refined oils are used again for the formulation of lubricants, since re-refining turns the waste oil back into virgin oil. This helps reducing fossil fuel consumption and CO2 emissions. 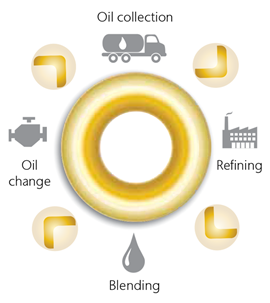